During the Dashain celebrations, Durga Ashtami celebrates on the eighth day. Also known as a part of Durga Puja, Durgashtami refers to Maha Ashtami.

The festival encourages fasting in some community while animal sacrificing in another.

Histroic era believe that Chamunda brought an end to Chanda, Munda, and Rakthabija (the three demons associated with Mahishasura) on this day.

It is understood that Ashta Sati, or the Eight Shaktis, vary according to the regions in South Asia. All eight goddesses, incarnations of Shakti. Despite representing different energies, these Divine Feminines hold one powerful presence.

Read Also: Dashain Fulpati – what do Nepalese do on the seventh day? 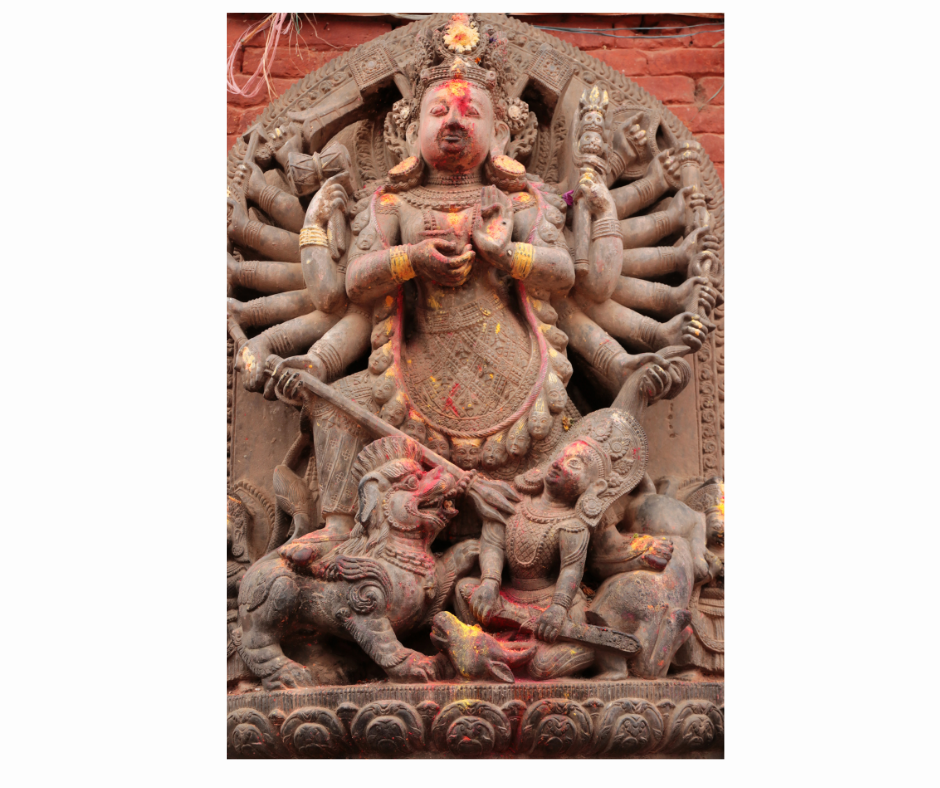 Asthami mantra: what is its significance?

A Goddess as fair as the moon, orchis and jasmine appear in the form of an eight-year-old child. The clothes she wears and her ornaments are both white and pure. A woman with four arms has three eyes.

The worship of her is also a means of removing all sins for devotees. The power she possesses is unfailing, and results appear instantly.

As Dashain approaches its penultimate day, the eighth form of Navdurga is offered in prayers and offerings.  Mahagauri, ruled by Rahu, a malefic planet. She depicts by a bull in numerous Hindu texts, hence also known as Vrisharudha. There are four arms visible on the illustrations, including a weapon called Trishul. On the other hand, she makes a damaru; in the third hand, an Abhaya Mudra appears; and in the fourth hand, she makes a Varada Mudra.

Mahagauri is worshipped on Ashtami by devotees. As an offering, white flowers (preferably jasmine) should be offered along with mantras. Young girls are served a meal at home on this special occasion.  In Hindu traditions, you can pray to Goddess Mahagauri to remove your troubles.

Those defects are removed when someone prays to her because Rahu, the illusory planet, rules her. In this regard, devotees pray on Maha Ashtami for relief from the suffering they have experienced. 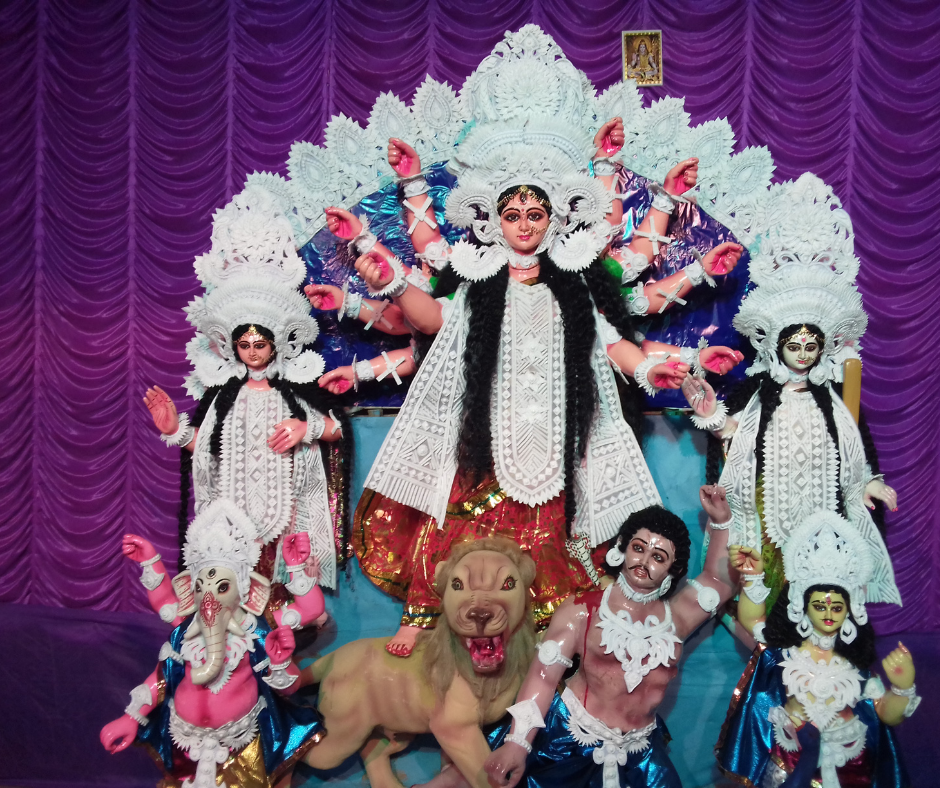 The tradition of Maha Asthami – the eight-day of Dashain festival

Some Brahmin families in Nepal celebrate Durga Ashtami by honouring the Kanya. Usually the Marwari and Brahamin family  organize a celebration event to honor a group of unmarried girls (in their mid-teens). According to this tradition, every girl (Kanya) represents the shakti (energy) of Durga on Earth.

A joint ceremony conducted in Nepal to welcome the newcomers, with Alati and Puja. The family greet them and then welcome them into the home. The ritual ends with sweets and food being given to the girls, along with small gifts.

Likewise, in some of the regions, the tradition of animal sacrifice takes place in a few of the Kali temples in Nepal.

Vijayadashami (8th day of Maha Ashtami). There is a great deal of devotion to Durga Bhawani and Kali Mata (different names and incarnations). The sacrifice of animal’s worships goddesses.

Some Hindus observe Asthami as a day of fasting. A night called Kal Ratri (Astahmi night) marks the end of the Hindu calendar. The temples and households of Kali offer animal sacrifices. Even after dusk, sacrifice continues. In most homes that celebrate the puja, feasts follow. Kathmandu primarily celebrates this day with syabaji. Nepalese cuisine includes beaten rice, commonly known as syabaji. 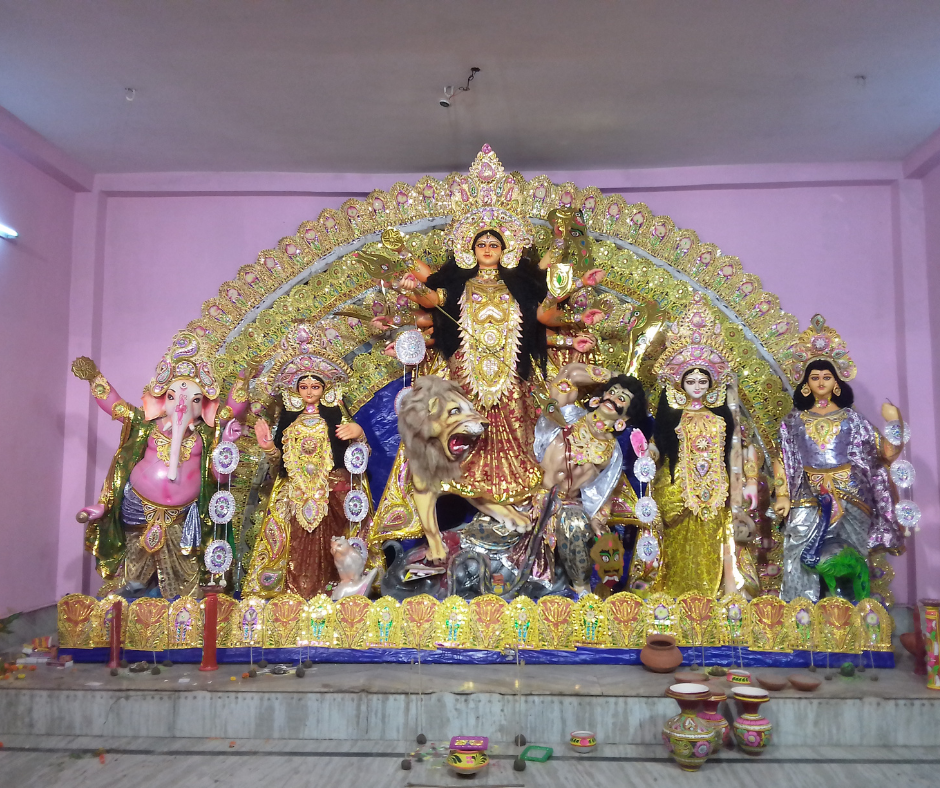 When Maha Asthami observes in 2021?

Taking the Hindu Lunar Calendar into account, Ashwin Sukla Asthami falls on Ashwin Sukla Tithi. The eighth day of Vijaya Dashami celebrates as per the Gregorian calendar is October 13, 2021.

There are other names for Asthami, such as Durgasthami and Veerasthami. Ashwayuja Shukla Asthami marks the event. During this period, Arjun, one of Pandav’s brothers, was in exile. As a result he took the Ayudha (weapons) from the Shami tree and performed puja of the weapons.

On Durgasthami and Mahasthami, the main ritual is Ayudha Puja or Astra Puja.

In the form of Bhadrakali, Goddess Parvati became powerful and fierce on Asthami. Frightened by her appearance, Mahishasur embraced heavy defeat along with the other Yoginis. The Sanskrit word Durga means the invincible. Having killed Mahisasur, she added another name also known as Mahishasur Marshini.

Maha Ashthami observes the Sabtamatrikas, Ashtamatrikas, and 64 Yoginis. Sadhaks and Yogis. The celebration holds similar benefit from performing the Asthamatrika Pooja during Navratri.

In addition to Asthami, Lord Mahagauri celebrates Mahagauri or the goddess of Navaradurga. Another important puja of Ashtami is Maha Gauri Puja.

The lore behind Maha Asthami or Durga Asthami

Lord Durga defeats Mahishasura, the buffalo demon, on this day of Maha Asthami. There is a legend that Mahisasura has a boon from Lord Brahma that allows a female warrior to defeat it.

As a result of Lord Indra’s defeat on the battlefield, Brahma, Vishnu, and Shiva created Durga. She energies of different male deities infused into each part of her body. In honour of Durga Ashtami, she used her trident to defeat Mahisasura with the weapons that symbolized their masculine strength.

During this festival, women tend to take centre stage. A reminder of female’s great power and status. In certain parts of Nepal, namely Chandi than in Syangja, Dakshinkali, Manakamana visualize animal offerings in great numbers.

We wish all our readers strength and power on Maha Asthami. Maha Gauri sweeps away the pains of devotees, as stated in the article. In that spirit, we wish our readers a happy and healthy Maha Asthami.